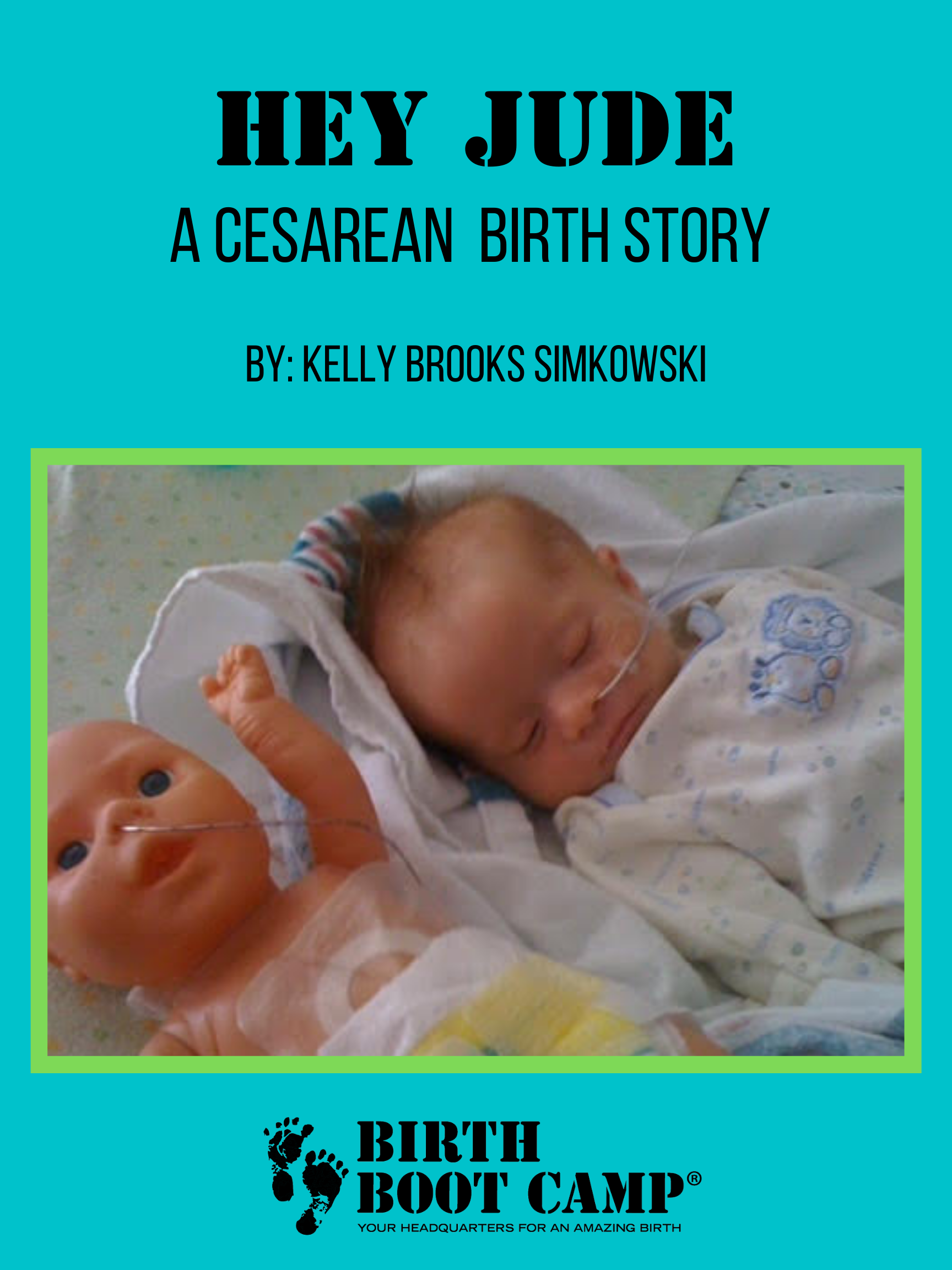 I took the pregnancy test telling me I was pregnant with my fifth child on the eve of my 40th birthday. With a 5-year-old and 2-year-old triplets at home, another baby wasn’t exactly what I had in mind for a birthday present, but I quickly became thrilled by the idea.

All of my other children were the result of many grueling rounds of fertility treatments and this time, I had finally conceived on my own. I had always wanted to be able to say, “I made a baby!” and now I had.

I scheduled my first OB appointment and along with it, a CVS and genetic counseling. For the next few weeks my husband and I went back and forth about finding out the sex of the baby. We had both a boy and girls already so for planning, it wasn’t an issue. I didn’t want to know, he did. I figured that if I were having a traditional pregnancy this time, I would go old-fashioned all the way and find out the sex in the delivery room. He wanted immediate gratification. Typical male!

The morning of the CVS, we first met with the geneticist. He explained that the risks of there being a birth defect in a fetus of a 40-year-old as being 1 in 18. I was starting to worry. This guy made it sound like a sure thing that there would be something wrong. My husband, on the other hand, was sure that we would be the other 17. We told the doctor that we wanted to find out the sex and then we went on to the room for the actual CVS test.

The test was surprisingly easy this time, which I wasn’t expecting as I had an absolute horrific and terrifying experience with my triplets. I went home after the test and played with my other kids, so excited that I would have more information about the baby by the end of the day. I was told to expect a call by 5pm.

At 5pm, I went to check my phone and saw that there was a missed call from my obstetrician. I checked the message but while I was in the middle of listening to it, the phone clicked with another call-the geneticist. The conversation went like this…
“Mrs. Simkowski, I have some bad news…the fetus you are carrying was found to have Trisomy 21, that’s 3 copies of the 21st chromosome, via FISH. The rest of the results will be back in about ten days, but I advise you to get in touch with your doctor so you can make “arrangements” with her. Do you have any questions?”

I picked my jaw up off the floor and realized that he hadn’t even told me what the sex of the baby was. The one thing we had really wanted to know. I asked what sex the baby was, and he replied, “it’s a male,” and then hung up.

The most defining moment of my life and I was standing alone, in my kitchen, while my other 4 kids played loudly in the other room. I needed to find a game face and fast.

My name is Kelly Simkowski, and I am here today to tell this story to you not as a doctor, not as a medical professional, not as an expert, but as a mother. A mother who has come to realize that the defining moment I experienced 11 years ago, was when I really became a mother and knew what it was to love unconditionally.

In the days following the news that the baby would have Down syndrome, there were massive waves of emotions. As much as I hate to admit it now, my first reaction was that I would terminate the pregnancy. I figured it wouldn’t be fair to my other kids, it would be a burden on our family, and it would be expensive. So many things to consider. I went so far as to schedule a termination appointment with my OB.

I started to have a drink or two when I went out, figuring since soon there would be no baby it wouldn’t hurt anything. I named the baby after my and my husband’s grandfathers. Two names I was not planning on using for a baby. I bought forget-me-nots and planted them in the yard so that every year when they bloomed, I would remember that baby. I tried every trick in the book to emotionally distance myself from what was happening. Abortion was something that I had never considered for myself. It went against what I personally believed in. I was terrified that my friends and family would find out what I had done and silently judge me. The pressure I was putting on myself was unbearable. I started crying every day. I couldn’t even rely on the support of my friends because I was too ashamed and embarrassed to admit what I was about to do.

Two days before I was scheduled to go in for the abortion, we had plans to take our kids to Elmo LIVE. I went upstairs to lie down for a few minutes before I started getting dressed to leave for the show. As I lay down on my bed, my eyes were drawn to my closet and to a mink stole that was hanging there. It was the one that of my grandmothers that I truly coveted and wanted to keep of hers when she passed away. I just lay there looking at the mink. Thoughts started rolling around in my head. “Why can’t I do this?” “Who says my kids won’t be better off with a sibling who has a disability?” “We have parented triplets already, what could be harder than that?” “I can’t have an abortion, that’s not who I am!”

I ran down the stairs to my husband and said, “I really feel like we are meant to have this baby. We have done hard things. We will do hard things. Can you get on board with this idea?” When he quietly whispered, “yes,” the weight of the world felt like it lifted off my shoulders. We were going to have this baby!

I was very fortunate to have quite a few friends who had children with Down syndrome so I quickly made some calls and sent some emails those first few days so I could arm myself with information. One friend suggested calling NADS, the National Association for Down syndrome. I didn’t feel ready to talk yet, so I just sent a quick email. I heard back right away. The woman I was connected to send me a copy of the book GIFTS: Mothers reflect on how children with Down syndrome enrich their lives. I read the entire book that first afternoon, so thrilled with the stories of hope, grace and strength. For the first time, I could really feel myself bond with the baby rather than the Down syndrome.

As parents attempt to imagine their child’s future, it is helpful to realize that there is no standard profile of a person with Down syndrome. As is true for everyone, the skills and knowledge he or she acquires will depend on life experiences as well as innate abilities. Don’t assume! Since I had a prenatal diagnosis and was informed of it over the phone, I was not offered any support, any suggestions of where to turn for information or any compassion. It was all done as if conducting a business transaction. I don’t believe that the geneticist or the OB ever considered that I would be carrying this child to term, and although throughout the remainder of my pregnancy and delivery, I encountered mainly positive support and information, it is the lack of compassion and counseling that has prompted me to tell this story so that hopefully other new parents will be better supported.

A parent will always remember the moment that they were told their child has Down syndrome, be it a pre-natal or post-natal diagnosis. There are several steps you can take to ensure that the parents are treated in the most compassionate way possible:
• When the diagnosis is presented, try to arrange for the parents to be together in a private setting. If the diagnosis is made post-natally, have the baby present if possible. Listen carefully; you may have to repeat what was said.
• Encourage the parents to ask questions of the appropriate medical professionals. Make sure they have a pad of paper and a pen to write down their questions or unfamiliar terms.
• Assure the parents that nothing they did or didn’t do caused their baby to have Down syndrome.
• Encourage the parents to talk and be willing to take the time to hold space and listen. Allow them to express their grief and anger.
• It is important for the parents to have a feeling of hope for their baby and for themselves. Help them to see some of the positive possibilities for their baby and for their family.
• Encourage the parents to take each day as it comes
• Refer the parents to the NADS Parent Support Program
Parents will never forget this experience and even though it is a challenging time, they will always remember your kindness and support.

While I can’t exactly say that the remainder of my pregnancy was smooth sailing and without issues, the way my boy made his way into the world was. My water broke at 11PM just as I was drifting off to sleep. My sister came over to stay with the kids, and my husband and I drove to the hospital, excited to finally meet him. It is so hard to forget the feeling of longing you get, waiting to meet and finally be handed your baby. So

Jude Patrick Christian Simkowski was born via C-section on November 15, 2009, at 2:45 in the morning to the chorus from the song “Hey Jude” sung by all of the doctors and nurses in the operating room. There was a smile on everyone’s face. The first line of “Hey Jude” is “Hey Jude, don’t make it bad, take a sad song, and make it better. Remember to let her into your heart, then you can start, to make it better!” He was lifted up quickly over the curtain and I was able to see those two little eyes as they opened and shut, looking right through me to the window of my heart.

We welcomed Jude into our hearts and family with open arms. Today, he is a happy and thriving 11-year-old with a smile and a hug for everyone he meets. He attends his neighborhood school and has been with the same group of typically developing peers since kindergarten. This fall he will head to middle school. His brother and sisters love him and treat him as just one of the gang. He and his daddy both love Bucky Badger and the University of Wisconsin Marching Band and music. And as for me, I said it earlier, the day I chose Jude was the day that I learned to love unconditionally, with all of my heart, and all of my soul. He is a wonderful gift, and you have the ability to allow another mother the pleasure of this gift as well. It all starts with your compassion.