Every great story has a beginning. Ours began with a normal American woman wanting a normal American birth with all the bells and whistles. “Am I going to have an epidural? What kind of question is that? Of course!?” is what she said when pregnant with her first baby.

And so she had your typical, high-intervention, hospital birth with an epidural that worked just fine and a narrowly escaped cesarean section, thanks to the help of a family member, who happened to be a doula.

She was fine with all of this for a while until she had a friend who inspired her to question everything.

This friend was planning a natural birth. Our normal American woman was pretty sure that her natural birthing friend was going to fail. After all, she seemed very sensitive to pain! Surely she couldn’t actually give birth without an epidural!

But this natural birthing friend did have an amazing birth and called her “normal” friend to tell her how wonderful it was. That is where our story really begins.

That typical American woman was our founder, Donna Ryan. Her friend, Alisa, inspired her to do something that sounded crazy just a few months earlier. One thing led to another, and Donna got her hands on the Dr. Sears Library and read about Martha and her births. Between getting educated and knowing someone who actually had a natural birth, she started to think that she too could have an amazing natural birth. 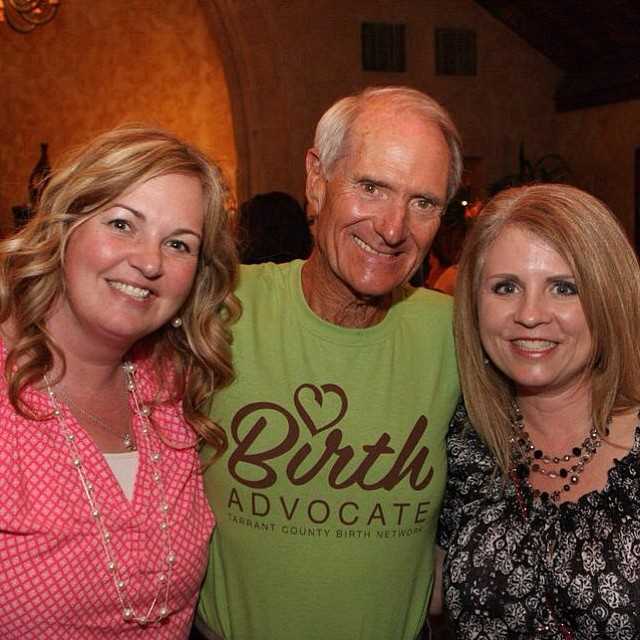 Donna Ryan (R) with her two main inspirations for her own natural birth, Dr. William Sears (C), and her friend Alisa (L).

A few years later, with lots of education and plenty of relaxation practice, she did just that. This birth wasn’t just run-of-the-mill. It was a life-changing, empowering, and eye-opening birth experience for Donna.

She knew she needed to tell other women how AMAZING birth could be!

Eventually Donna became a childbirth educator herself. Teaching for 10 years, she found that there was not a curriculum out there that had everything she knew birthing women and their families needed to be fully prepared. She, along with a team of birth professionals, developed the Birth Boot Camp curriculum.

Through years of teaching hundreds of couples, Donna learned what needed to be covered in order for her students to have the best chances at an amazing birth and lower their chance of cesarean section and increase their success at breastfeeding.

She realized that there was a need to talk about the benefits of having a doula. She saw how women who birthed with midwives often had very different birth outcomes than those who did not. She recognized that women who underwent chiropractic care during pregnancy often had shorter labors with better positioned babies. She recognized the powerful role that relaxation made in the births of her couples.

For years, Donna had all of her childbirth classes on DVD with her main audience being military families. She shipped DVDs all over the world! There had to be a better way, while still keeping the classroom feel, even from a thousand miles away…

Birth Boot Camp was the first to begin such a program and continues to lead the pack in accessible childbirth education for modern couples.

But Birth Boot Camp is not a one-woman show. Donna always saw the important contributions that a strong team can make in a birth team, and in a business. She recruited midwives, chiropractors, doulas, other educators, massage therapists, personal trainers and many others to round out this incredibly comprehensive childbirth education program.

At Birth Boot Camp we truly believe that you can have an amazing birth. We all have had amazing births and we want the same for you. We believe in your ability and we know what it takes to achieve this goal.

Join us on the path to an amazing birth by taking an in-person or online childbirth class. And don’t forget to hire a Birth Boot Camp doula. You won’t regret it!

Ready for more than a class? Check out our childbirth educator or doula certification programs where you, too, can help couples have amazing births.

© 2022 Birth Boot Camp® Your Headquarters for an Amazing Birth.