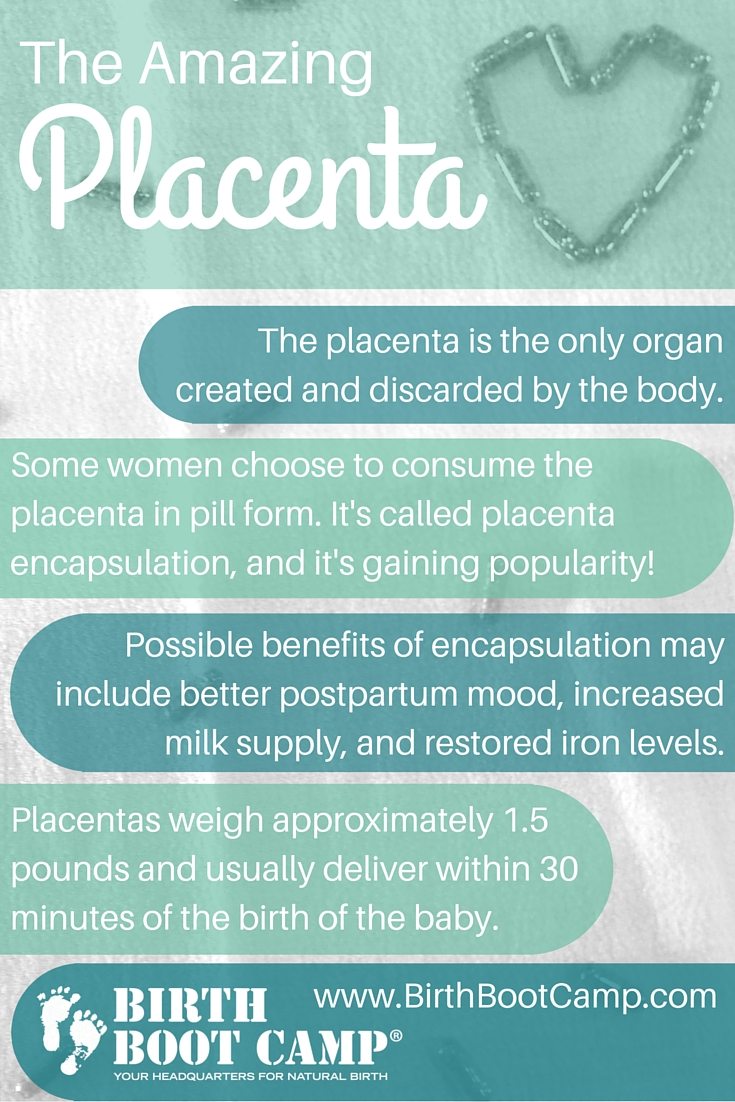 The word placenta is from the Greek for flat cake or flat plate, which is descriptive of the round, flattish organ created by pregnant women at the very beginning of pregnancy. With the bag of waters attached to the placenta and surrounding the baby, together they nourish and protect the baby for its nine months of gestation. The cord that inserts into the belly button of the growing baby on one end and the center of the placenta on the other, carries nutrients and oxygen to the baby.

When a pregnant woman eats, drinks, and breathes during her pregnancy, the placenta takes what the baby needs and passes it on. What the baby doesn’t needs goes back through the placenta and mom filters through her own system.

It can be useful during pregnancy and childbirth to take note of the incredible and seamless ways our body works. A little thought paid to the placenta can help us do just that.

Smooth and vascular on the side it faces the baby, and lumpy on the other where it attaches to the uterus, the placenta is something of a miracle, yet to be fully understood by modern science.

While we could describe the placenta to you, it wouldn’t do it justice. The video below is of Alexa Gumm, an experienced doula, showing all the details of a normal placenta.

What are common variations of the placenta?

The placenta, while basically the same in every pregnancy, does vary. On average it weighs just under two pounds, though it tends to be bigger the bigger the baby is.

The cord generally inserts somewhere in the center of the placenta, but can insert anywhere. When inserted on the side, it is known as a battledore insertion.

Placentas sometimes have multiple lobes as well. In rare cases, the umbilical cord inserts into the membranes, known as a velamentous cord insertion, which can be dangerous because the vessels is not protected by the Wharton’s jelly in the cord.

When something goes wrong with the placenta-

There are various things that can go wrong with the placenta. They are rare but include:

All of these issues can cause serious problems. Things that can increase the chances of these problems include smoking, drug use, maternal age, injury, and previous cesarean section.

What happens when you deliver the placenta?

Despite its great power and importance, we scarcely notice the placenta. It usually delivers within 45 minutes after the birth of the baby, and because it has no bones, we often don’t even notice when it comes. 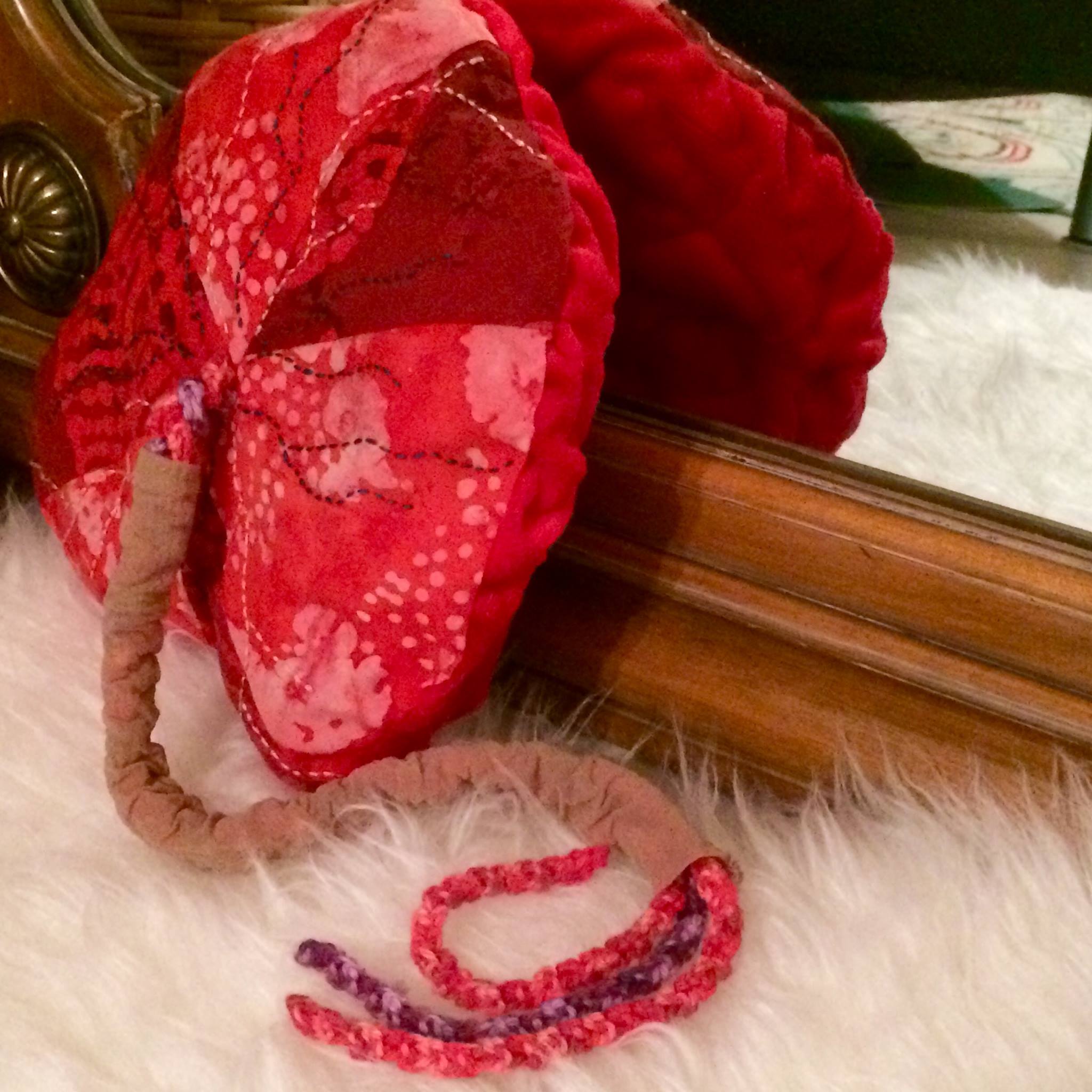 This cloth model of the placenta clearly shows the central insertion of the umbilical cord, and the smooth and lumpy sides.

After delivering your baby, the placenta will still be attached to the baby via the umbilical cord. It will shortly stop pulsing and the placenta will detach from the wall of the uterus, there will be a gush of blood, and then the placenta can be delivered shortly after. This is known as the third stage of labor.

Women usually just need to cough in order to deliver it and they are hopefully so enamored with their new baby, that they hardly pay it heed.

Some providers allow the placenta to deliver naturally, others tend to encourage or rush the process, sometimes due to a fear of hemorrhage which, if it is going to happen, sometimes happens now. It is generally standard for anti-hemorrhage medication like Pitocin or Cytotec to be given at this time.

Retained placenta, when the placenta does not detach, is rare, but can be remedied with medical procedures.

What do you do with the placenta after the birth?

There are a few options for what you can do with the placenta after you deliver it. 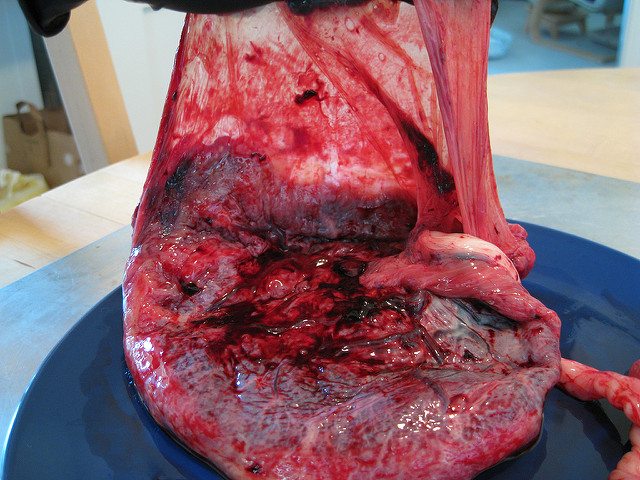 No matter what you do with or how you deliver your placenta, it is a pretty incredible organ. Created by you to nourish your baby and then birthed when its job is finished, there is nothing quite like it. Your amazing placenta is another example of how well our bodies function in the work of growing babies.

A special thanks to Kristen Powers who let us share her beautiful fabric placenta. You can see her other birth related fiber art on her website, ladypowers.com.