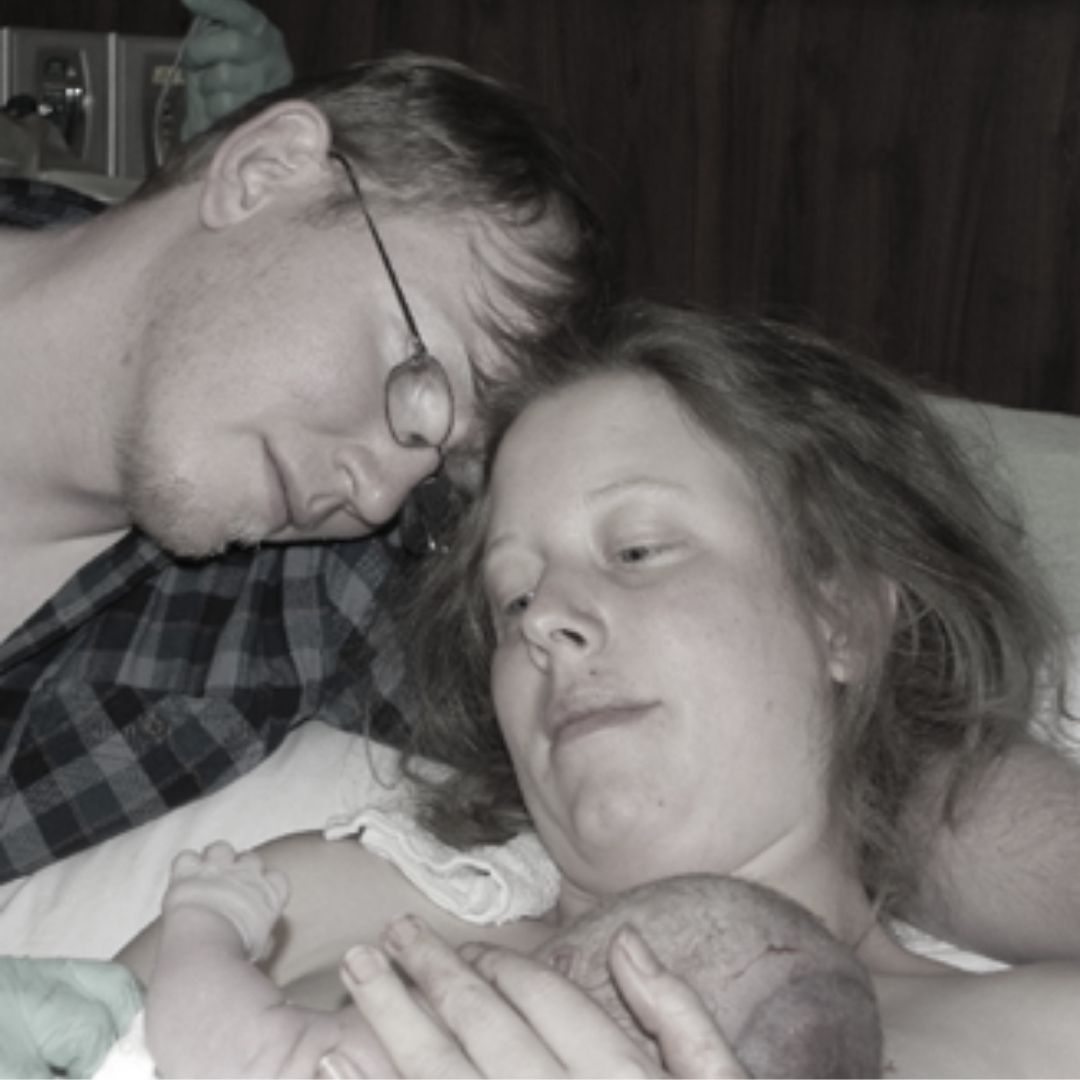 Playlists for Birth: How Music Enhanced My Labor

By Hollie HauptlyOctober 23, 2019No Comments

Music has always played a huge role in my life.  When I was little, my mom played classical music for me during the day, and when my dad returned in the evenings, rock and blues dominated the stereo.   I sang in a local children’s choir in elementary school and took up flute in 6th grade.  As a teenager, I became enamored with marching band, choir, jazz band, you name it – if it involved playing music, I was probably there!  I majored in music education in college and spent five years in the frigid Rocky Mountains teaching elementary music, alongside my husband who is also a music teacher.  It is no wonder that when I got pregnant, one of my first thoughts was, “Ooh, time to build a labor playlist!”

But I didn’t build just one playlist.  I built three – “Upbeat Labor,”“Melodic Labor,” and “Ambient Labor.”  Each one served a different role during my different stages of labor.  I use an online streaming service called Spotify for most of my listening needs, and this is the platform in which I created my birthing playlists.  I spent hours during my pregnancy building these playlists – so many hours with a cup of herbal tea in hand, sitting on the bed, the computer in my lap, listening to fragments of songs and deciding which ones made the cut.  At some random times during the day, I’d remember a song and rush to the computer to add it.  Other times, my husband would send me songs from work that he thought I’d like.  This was a peaceful time I remember fondly.

My contractions started around 8am on a November Monday morning.  As they began getting more and more intense, it was time for the first playlist – “Upbeat Labor.”  This playlist was full of fun, fast-tempo jams that I love.  Many had themes of women empowerment – there’s nothing like singing along to the chorus of “Woman” by Kesha to make you feel like you can do anything!  I spent lots of time in the kitchen, gripping the edge of the table, swaying my hips to the beat, moaning through contractions while listening to these favorite fast songs.  They were energizing and I enjoyed “dancing the baby down.”  Other favorite artists from this list were The Dixie Chicks, Tegan and Sara, and Lady Gaga.  And who could resist Elton John’s “I’m Still Standing?”

In the late afternoon, it was time to head to the birth center.  We made sure our phones were good and charged, so we’d be able to plug in the phones there.  Spotify has a cool feature where you can download playlists and albums directly on your phone, so you don’t need WiFi to listen.  It was super handy being able to put the phones on airplane mode (who wants a million texts asking, “IS BABY HERE YET????” while you’re laboring), and still have access to music.

Upon arrival to the birth center, I immediately asked for my longest playlist: “Melodic Labor.”  This is the one I spent the most time compiling during pregnancy and included nearly seven hours of music (and I listened to it ALL).  As I created it, I thought back to all songs that I had ever considered “beautiful.”  There were choral pieces that I had sung in university choir, band tunes that I’d played, and of course lots and lots of other songs that I’d grown up with.  All these songs were slower, with beautiful melodies taking precedence over a fast tempo.  Enya, The Beatles, Elton John, Eric Whitacre, and Sufjan Stevens were a few of my best artists/composers here.

During active labor, contractions were coming faster and harder.  Listening to this playlist kept me in the moment and surrounded by beauty.  During contractions, I focused on matching my vocalizations to the tonic, or “home note” of the current song.  It gave me something to concentrate on beside the intensity of the contractions and it was more satisfying than making random moaning sounds (although I had plenty of that too!).

I spent the most amount of time in this stage.  I labored in the tub, squatting on the toilet, sitting on the birth ball – you name it, and I probably tried it at least once.  Sometimes I was keenly aware of the music and actively listening and focusing, and sometimes it was just background noise, depending on what was happening with the labor.   Well into the night, I was totally exhausted and less focused on the music.  I was in the birthing tub for the second time, eyes closed, between contractions.  My husband was right beside me, holding my hand, when the music suddenly changed.  Instead of my wonderful, soothing playlist, the first dissonant violin notes of “Danse Macabre” by Camille Saint-Saens rang out.  One feature of Spotify is that once your playlist is over, it will auto-play something else for you.  We were only a week past Halloween, and I’d been listening to Danse Macabre the week prior.  Spooky fun for Halloween, NOT for birth.  Thankfully my husband knew what was wrong straight away and turned off the music!

Sometime around midnight, I started throwing up.  “This is it… transition!” I thought.  I wish I could say that was true, and that I pushed baby out shortly afterward.  Nope.  My contractions started slowing down.  I was completely spent and could barely keep my eyes open anymore.  It was deemed that I needed to sleep.  My midwives and doula helped me onto the bed and maneuvered a peanut ball between my legs.  My husband snuggled up behind me and put on the next playlist: “Ambient Labor.”

When compiling this playlist, I chose songs that didn’t have a distinctive beat or melody.  Instead, I searched for nature sounds or ambient soundscapes.  I feel like had I not been trying to sleep, this would have been peaceful to listen to.  As it was, I was barely aware of it.  Many of the tracks had a meandering Native American flute line, and my husband complained later that he couldn’t sleep because of the flute!  Oops.  Maybe not such a great choice.  This was the one playlist that didn’t particularly help us during labor.

After a long night of not sleeping much because of contractions every 5ish minutes, I “woke” ready to try pushing again.  I’d listened to every playlist I’d made, so I labored in silence for a few more hours.  Around noon – I’d been in labor for about 28 hours at this point – we decided on a hospital transfer so I could get an epidural and have a proper nap.  We had truly tried everything.  Every position, an herbal tincture, nipple stimulation with a breast pump, everything.  I was fully dilated and I’d tried pushing multiple times, but baby just wasn’t coming.  We were disappointed, but it was the best choice we could have made.

At the hospital, I got my epidural and finally got sweet relief in the form of a 3-hour nap!  The worst of the fog in my head now cleared, I was ready to push again.  Baby, however, had other plans.  Although she was head-down, her head wasn’t presenting at the crown, which made it impossible to pass through the birth canal without intervention.  As soon as the doctor got a good seal on her skull with the vacuum, she practically flew out!  In the end, the soundtrack to my birth was a hospital nurse counting to 10, my own forceful grunts, and my doula exclaiming, “You’re about to meet your baby!”  After a total of 35 hours of labor, Penelope was born via vacuum assist.

In a way, I feel like I had two births.  I had my beautiful natural experience with my custom-made music playlists, and then I got the hospital epidural birth that is so often depicted in American media.  I have no doubt that if I hadn’t had such great support, education, and music during my labor, things would have turned out differently.

Penelope is approaching two years old, and I still listen to my “Melodic Labor” playlist from time to time.  They are my go-to songs when I need some peaceful music to help wake me up in the morning, or when winding down at night.  If the toddler is having an especially emotional day, listening to this music helps calm us both down.  For me, listening to this playlist is tinged with just a hint of sadness that I didn’t quite have the birth I desired, but ultimately it reminds me of the positives of my birth – being surrounded by my loving husband, doula, and aunt (shoutout to Aunt Donna Ryan!), dancing in the kitchen, humming during contractions in the tub, and of course meeting my new daughter.

Tips for Building YOUR Labor Playlists: