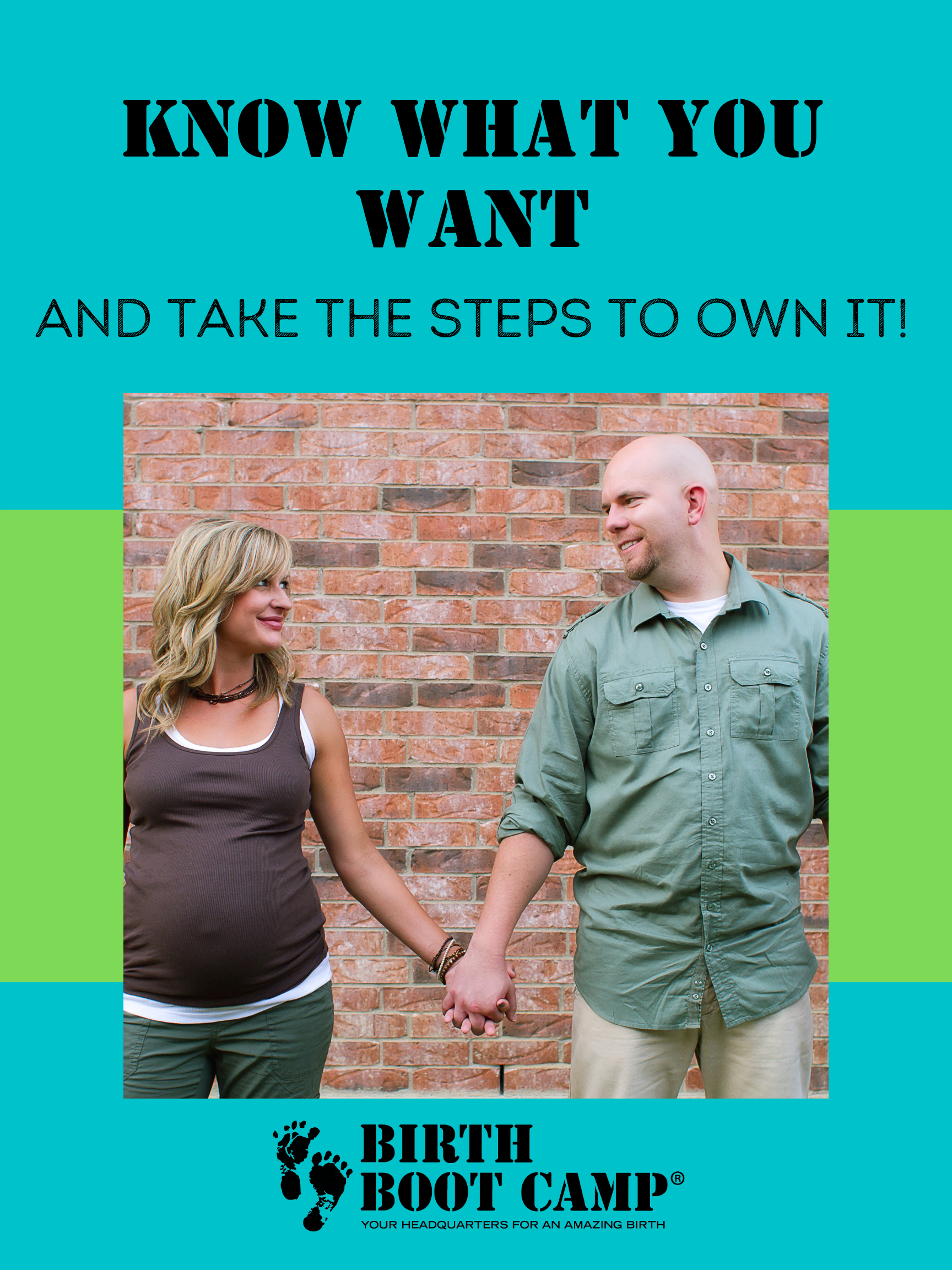 Know What You Want and Take The Steps to Own It!

When we launched Birth Boot Camp in March 2012, our focus was entirely on helping couples have a natural unmedicated birth. In 2017, we changed our tagline to focus on having an “amazing” birth. As the founder of this company, I still have mixed feelings. While it was a good business move, I want couples to know that Birth Boot Camp provides an excellent road map to achieving a natural birth. Let’s back up a bit…

When I was pregnant with my first baby, I remember talking to a woman from church who had just given birth with a midwife. She would drop a sentence every now and then about why she had chosen a midwife instead of an OB, but she’d never expound on it. I’m sure she was afraid of offending me, but the truth is, I knew nothing about birth. Well, except that I was terrified. I honestly wish she would have shared some things with me. I was just going along with whatever my OB told me. I thought I just wanted an epidural and a healthy baby…

I didn’t have an unmedicated birth until my second baby when I learned all the things. It was an amazing and life-changing experience. There were moments in that birth and the two that followed where I really second-guessed myself and the decision to have a natural birth, let alone the decision to give birth at home!
Still, after that first unmedicated birth, I wanted to shout from the rooftops, “Ladies, you can do this!” Sometimes we need encouragement. Women should tell their natural birth stories! They inspire others and help them seek out their own amazing experience.

Let’s talk about doulas for a minute. The notion, even at Birth Boot Camp, is that doulas support whatever kind of birth you want. In theory this sounds amazing, but I believe there is an element of encouraging, even pushing, a woman in labor that is often necessary. Let’s be honest, labor is hard. For nearly all women, there comes that moment when she wants to give up, throw in the towel, and get the epidural. If everyone around her says “That’s okay,” she misses out on an opportunity to dig down deep and find her power.

That being said, a doula is not an advocate in the delivery room. She can encourage couples and even act as a “translator” with all the medical jargon. But she cannot – should not! – speak for her client. A certified Birth Boot Camp doula has so many tools to help couples have an amazing birth – yes, even an unmedicated one!

Here are a few questions to ponder regarding your birth:

-Do you want to be encouraged – even pushed – to have an unmedicated birth?
-What is the main reason you want to hire a doula? What role do you want your doula to play?
-A hand-holder?
-Support for your partner?
-Educational support or “translator?”
-Do you just want a knowledgeable “friend” by your side, no matter what happens?

A few years ago, I was talking to a friend who happens to be an anesthesiologist. He was very negative about natural birth and doulas (that’s another story for another day…), and the main reason was because of a story he told about a woman getting an epidural who kept apologizing to her doula as it was being administered. I inwardly cringed as he told this story. Your birth story is just that – yours. Don’t have a natural birth for other people. Know your reasons for wanting a certain kind of birth and own it!

After so many years in this business, I really don’t care whether someone has a natural birth or not. I used to care so much. But what I do care about is that they are educated, have a good birth team, and actually know what they want. That is the purpose of this post. What kind of birth do you want? Do you want to understand your options and the decisions placed before you? Do you want to be a driver or a passenger? Do you want to avoid a cesarean? Do you want to breastfeed your baby? Yes, a doula will support the birth you want, but first, you must decide what you want that to look like. It begins with education.