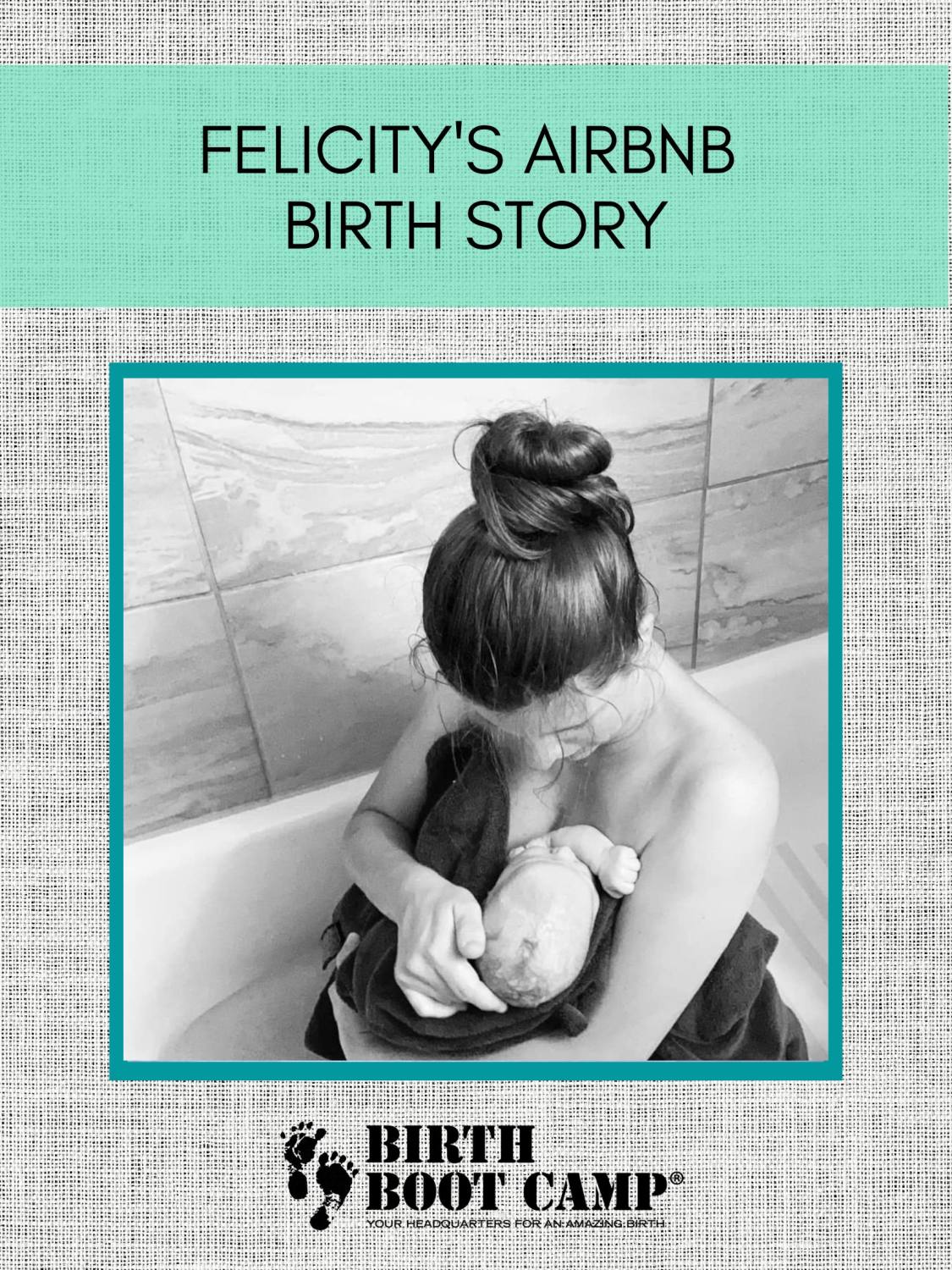 So, let’s start at the beginning of this whirlwind pregnancy….

Back story- Michael got orders to South Korea, shortly before COVID hit. We made plans for the kids and I to go live with my parents so that I could begin midwifery school and be there to help with my dad, who has dementia. We planned on traveling back and forth from Korea to Texas so that it didn’t feel like such a long tour. All those plans went out the window with the COVID restrictions, and it’s become next to impossible for us to travel back and forth as planned.

We had been tracking ovulation for a few months and semi-trying to conceive. With the upcoming separation of Michael’s tour in Korea, I had hopes of getting pregnant beforehand. When we learned that Michael wouldn’t be able to escort us to Texas, we came to the realization that the timeline wouldn’t line up and discussed maybe we’d try for a mid-tour baby. But then, our flights got delayed 3 days…

We found out I was pregnant after I was already in Texas. But a couple of months into midwifery schooling, I realized that now just wasn’t the right time and made the difficult decision to take a step back.

Having a homebirth this time around was the only logical option. I have a history of precipitous births, and each one seems to get faster. I hired a midwife and birth photographer, as I prepared for a homebirth at my parents house.

In my previous 3 pregnancies, my babies have spontaneously been born between 37-39 weeks. So naturally when planning dates for Michael to come home, we planned around having a baby around the same timeframe.

Towards the last week of his month-long visit, I began all the natural induction things I could think of. They would cause contractions, but always fizzle out. I became extremely emotional and overwhelmed by the thought that we may not have a baby before Michael had to leave and go back to Korea.

Michael reached out to his command and was granted 4 extra days of leave. It seemed to give me a little extra breathing room.

Prior to Michael coming home, I had booked a farmhouse style Airbnb in Euless (DFW area) for the last 2 days before he was supposed to fly out. I had assumed we would have a baby by then and had intentions of hiring a photographer to take family pictures in that gorgeous home with our new little addition. As we approached the dates of our stay there, I reached out to the renters, explained our situation, and asked for a refund. They denied any sort of refund, so we decided to go stay anyway. I spoke with my midwife, Mercy Eizenga, who agreed to come there in the event that I went into labor while away.

On Sunday (my due date), we wanted to go do something fun and get my mind off of forcing my body to have contractions. We loaded up and went to the Hurricane Harbor Waterpark. I pumped before breakfast, and on our drive to the waterpark. Again, it caused contractions, but then they’d stop. We walked the park, the lazy river, and the wave pool. All of which would cause contractions until I slowed down, then again, they’d stop. Nothing felt any different than Braxton Hicks, which I’d had throughout the whole pregnancy.

After our day at Hurricane Harbor, my fellow doula friend, Kelsie offered to come down from Oklahoma and assist me with some spinning babies movements/positions to try to get baby into a better position for labor. She arrived around 8pm. I pumped in hopes of triggering contractions and then we got started with a three-balances around 8:30. Again, contractions completely stopped.

Afterwards, I got up and did a little curb walking in the garage while chatting. I decided to pump one more time before Kelsie left and I went to bed for the night.

Within the first minute or two of pumping I had two contractions that seemed very close together. When I felt the second one building, I turned to Kelsie and asked, “how far apart were those?”. As she went to pull up a contraction timer on her phone, my water broke. It was 9:52. My jaw dropped. I immediately went inside, informed Michael and began texting Midwife Mercy, who told me to rest if I could. While standing in the kitchen texting Mercy, I had a few more contractions. Still in shock, I wanted to clean up and decided to get in the shower. I knew the warm water would help me relax and get into a good mental space.

As I turned on the water, I heard Kelsie tell Michael, “She’s secluding herself…”. Kelsie knows that that is how I labor and that I have babies fast. I began timing contractions for my midwife while in the shower. The waves felt extremely close with barely any break in between. They were about every 2 minutes and lasting close to a minute. Michael came into the bathroom to see what I needed from him. At that point I was having to focus and breathe through each contraction. I wasn’t conversing with him well. At 10:33, I told Michael, “Get my phone and call Mercy”. I was feeling pushy. 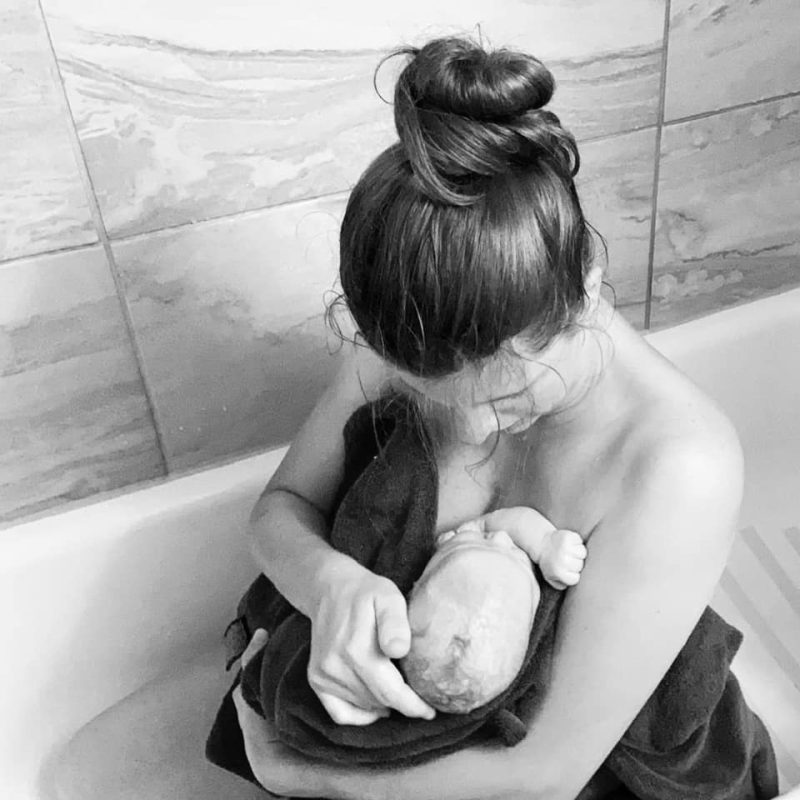 Mercy was already on the road. I knew I didn’t want gravity’s help at this point. Things were moving quickly. I got on my hands and knees in the shower to attempt to slow things down. Michael put her on speaker and sat the phone on the edge of the tub, next to my head. With the shower water still running, Michael stood at my head and rubbed my lower back. I focused on breathing through the urge to push. I could feel baby crowning. I felt the ring of fire, but it seemed to last for several minutes. As I focused on panting and breathing through the burn, I held baby’s head in my hand. Soon her head was born with her right hand in a fist against her left cheek. Then came her right arm, and I caught her body. I brought her up to my chest and sat back. Time of birth 10:56pm. Michael grabbed a towel and placed it over her. She let out a sweet cry as I rubbed her back. Immediately Michael went to wake up the other kids. Kelsie took pictures and updated Mercy.

With no bleeding yet, I moved to the bed and continued to have intense contractions every couple of minutes until the placenta was born at 11:20.

Midwife Mercy arrived at 12:15am, checked out baby, placenta, and me. All of which were great!

Baby sister weighed in at 7 lbs, 12 oz. 20 inches long. Our biggest baby yet and born on her due date. 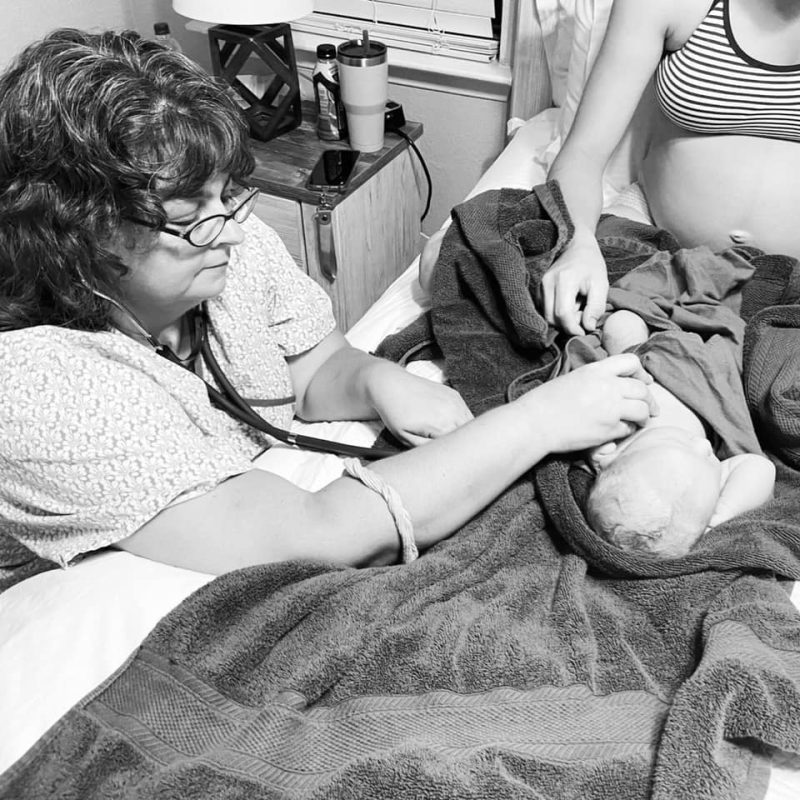 After a couple of hours bonding, Michael put the big siblings back to bed, Kelsie and Mercy left, and we cuddled up in bed with our precious new baby before driving back to my parents house the next day.

Thank you for sharing this detailed birth story and images! I love how to the point and vivid it was. What an amazing way to give birth in a relaxing Airbnb! I definitely recommend the shower as a way to relax and find comfort.
An amazing birth experience thanks to having a great support system and relaxing home environment. Congrats (: