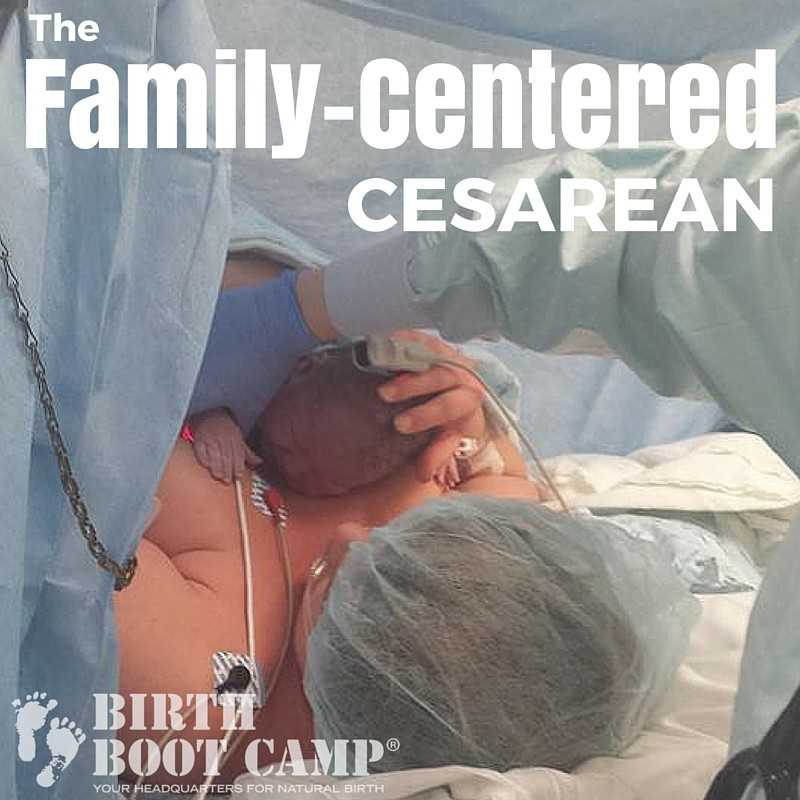 The practice of family-centered cesarean (also known as gentle cesarean) is becoming more widely talked about in the birth community as well as mainstream media outlets.

We are excited to see this shift towards a gentler cesarean because it indicates a shift to mother-centered care that better supports her and her family throughout the birthing process and is healthier for the baby. A family-centered cesarean honors the deep emotional impact that a birth experience will have on a woman and helps to maximize happiness and satisfaction with the birth experience.

What is a family-centered cesarean?

Some refer to this practice as gentle cesarean. While this is understandable, we prefer to use the terminology, family-centered cesarean because it recognizes the effort to make the birth more supportive of the family and its wishes, without minimizing the fact that a cesarean–no matter how respectfully it is done–is major abdominal surgery. Many of our VBAC childbirth educators point out that even a respectful and kind cesarean is still a surgery with a long recovery time. 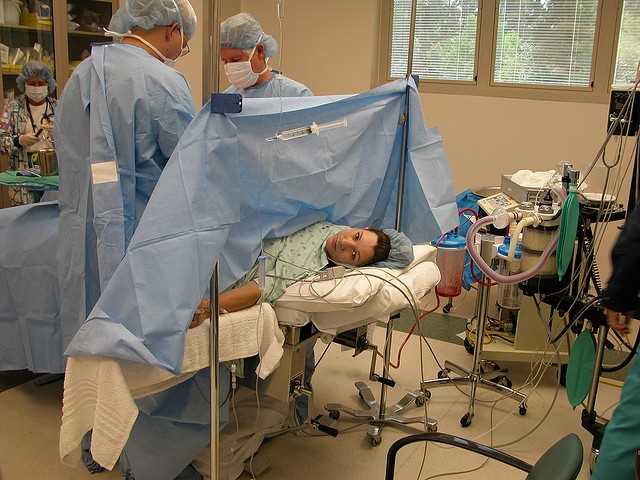 This picture is a wonderful illustration of a typical cesarean section. Notice the drape obscuring the mother’s view, and her arms to her side.
Photo credit: / Foter / CC BY

A typical cesarean starts mom being restrained to the surgical table. This is supposed to ensure that she cannot accidentally interfere in the surgery. She is hidden behind a curtain where she cannot see her own baby being born, isolating her from her own birth. The cord is immediately clamped and cut. The baby may be shown to mom, but because her hands are immobilized, she cannot hold, much less nurse, her baby without help from others. Often the baby is quickly taken to an infant nursery and only brought back to the mother later, often after hours. These women often report that they feel like they missed out on being a participant in the baby’s birth. 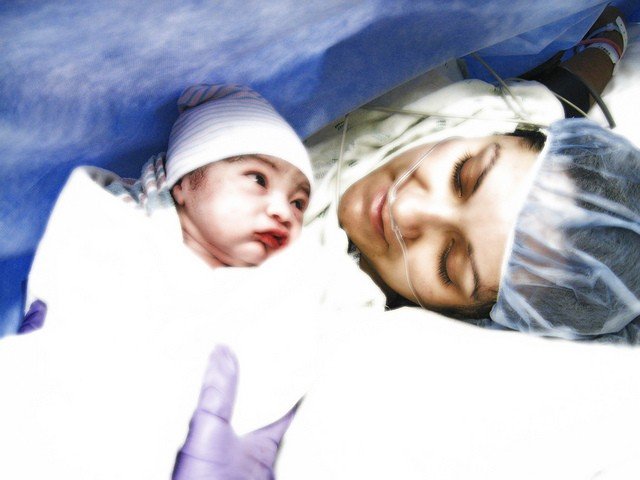 This picture is a good illustration of how mom first meets her baby after a typical cesarean section. As you can see, she is not able to touch or hold her baby.
Photo credit: Ian D. Keating / Foter / CC BY

There are many problems with the traditional way of performing a cesarean section. Women who have been through this process, even when a cesarean birth was needed for mom and/or baby, sometimes find it traumatic. They miss those hours of touch and nursing their baby. They miss being the first to touch, hold, and see their baby. They regret that the baby did not receive all of the blood available to it through the placenta. They yearn for an experience that was honored not just their needs, but the needs of the infant: the need to be close to and attached immediately to the woman who has patiently fed and nurtured it over nine months. 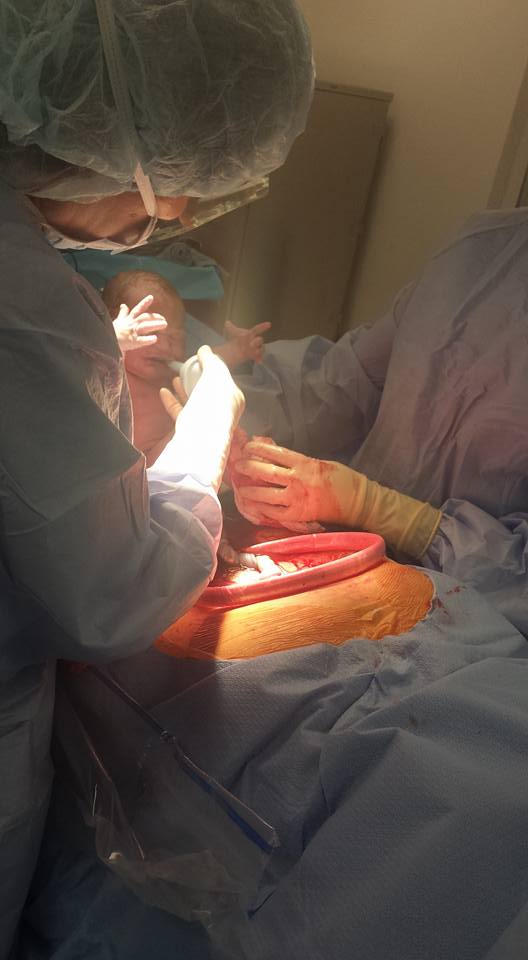 The moment of birth. Baby is treated as gently as possible and the umbilical cord is not clamped and cut immediately. 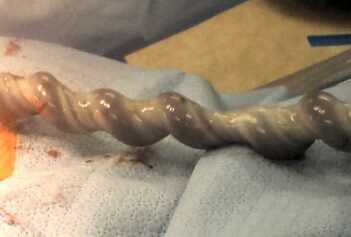 As you can see, the cord remains intact while the baby receives all its blood. 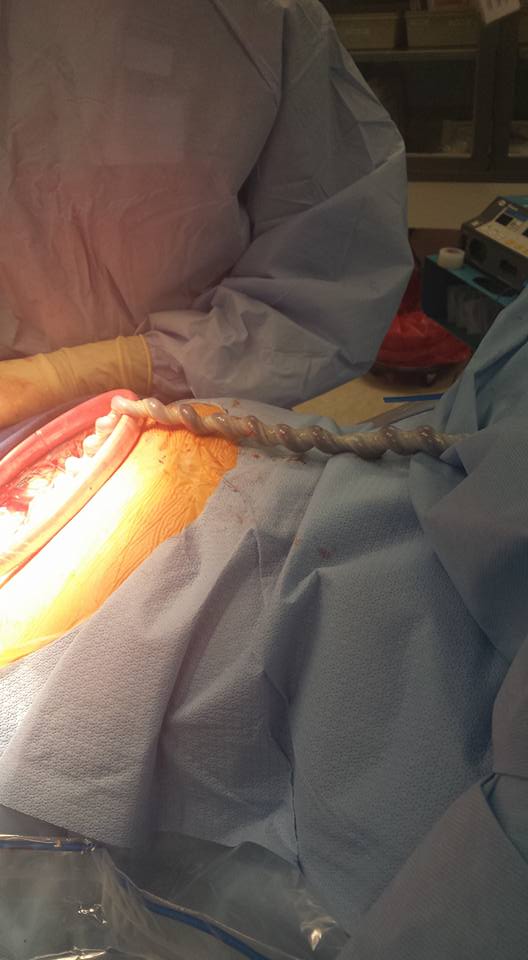 In this picture, you can see that the baby has been handed to the mother, the cord is left intact, and the birth team continues to work. 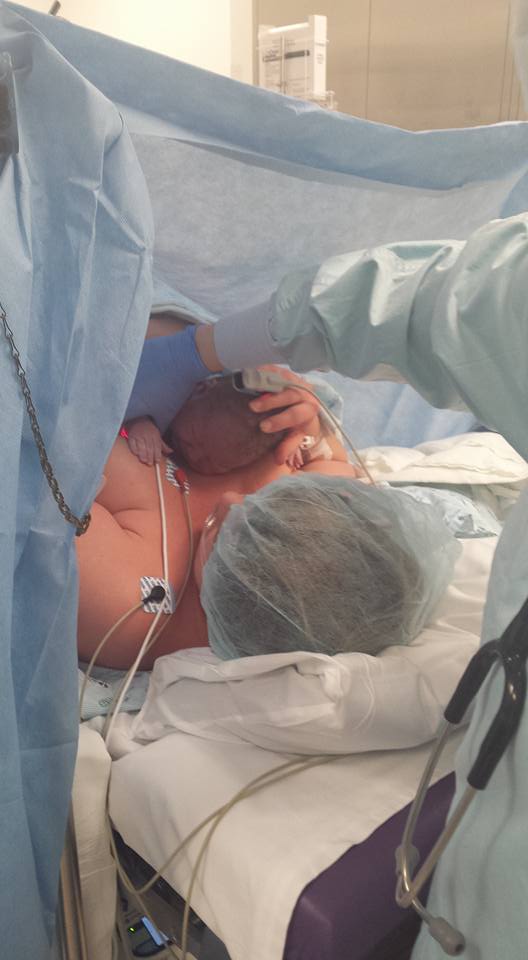 One of the most appealing things about a family-centered cesarean is that the mother and baby are quickly able to experience skin-to-skin contact. This is a beautiful moment!

The family-centered cesarean changes this experience profoundly. The screen is often lowered so that mother can see her baby being born, or there are even screens now that are transparent. Her hand is left untethered so that she can touch her infant. The baby is allowed to receive all the cord blood that is rightfully theirs, thus ensuring continued oxygenation from mom as it adjusts to this new life out of the womb.

The baby is immediately brought to mother so that he/she can nurse and suckle at the breast if mom and baby are ready. Dad/partner is part of the process; he is present and supportive,  offering her words of encouragement and being a familiar face and smell in an unfamiliar environment. The room is less “surgical routine” and is purposely made more sacred in an effort to honor the event of birth.

Birth is a life-changing event no matter how it occurs. Part of our passion as educators and doulas is helping the birth experience be positive for the woman, her partner, and her baby. So much of the memory of our birth experience will be the way we are treated during this time, and less about exactly what happens. A woman who is honored, respected, and treated with kindness will have a very different experience than one who is traumatized, disrespected, ignored, and left alone- no matter by what mode she births her baby.

We are honored to be able to work with providers who are re-thinking the way that birth is practiced. We hope that as news spreads about the possibility of birth being better and more empowering, more and more women will truly be able to say, “I had an AMAZING birth.”