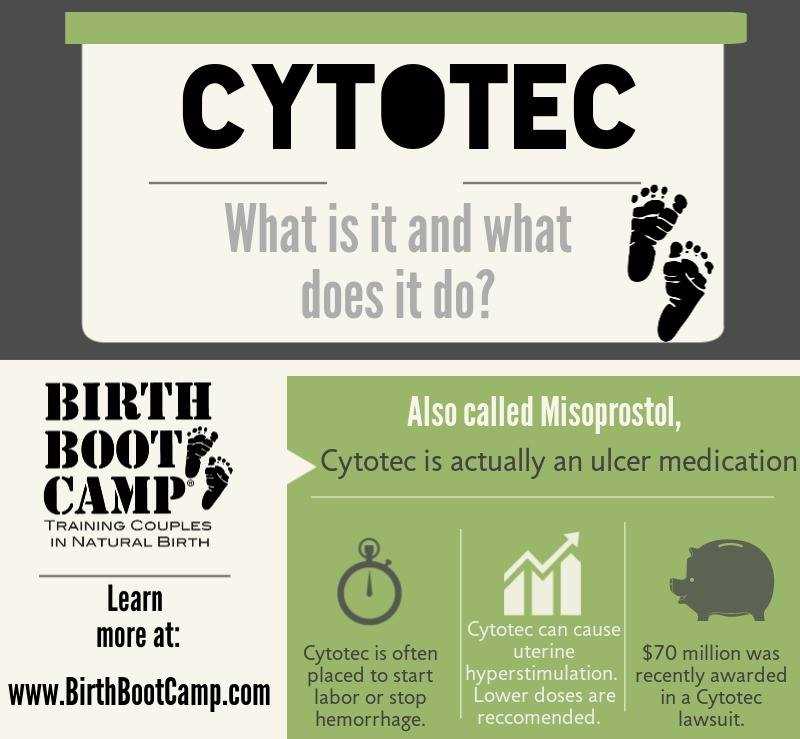 Once you begin researching birth, you will probably stumble up the product known as Cytotec. Because of a powerful ability to cause uterine contractions, Cytotec has found its way into obstetric practice. What should you know about Cytotec before your birth?

Because Cytotec is a synthetic prostaglandin, it can cause uterine contractions. Because of this, it is frequently used in labor induction, both in and out of the hospital. Cytotec comes in pill form and is typically cut in half (since the pill is not intended for labor induction it is not dosed properly for such) and then inserted into the vagina and onto the cervix. The pill then dissolves quickly and contractions often begin. Cytotec can be given a variety of ways including orally, sublingually, rectally, and buccally.

Because the drug dissolves, it is impossible to remove once administered, as opposed to Pitocin, which is administered via IV and can be turned off or down, if needed. Still, some like to use Cytotec as a cervical ripener, often in place of (but sometimes in conjunction with) something like Cervidil or Prepadil.

Studies have been conducted comparing Cytotec to Cervidil (prostaglandin E2) and found that Cytotec caused quicker deliveries but increased hyperstimulation.

Although misoprostol in women at term with an “unfavourable cervix” and intact membranes was more effective than PgE2 in achieving vaginal delivery within 24 hours, misoprostol does not reduce the rate of caesarean delivery either in all women or in the subgroup of nulliparous women, and it increases the rates of tachysystole and hyperstimulation. (12)

It is interesting to note that the above study, in which Cervidil and Cytotec were compared in their ability to ripen a closed or “unfavorable cervix”, the primary outcome was cesarean, with the second most common outcome being hyperstimulation and tachysystole.

A Cochrane review had this to say about Cytotec useage:

“Sometimes it is necessary to bring on labour artificially because of safety concerns for the mother or baby. Misoprostol is a hormone given by insertion through the vagina or rectum, or by mouth to ripen the cervix and bring on labour. The review of 121 trials found that larger doses of misoprostol are more effective than prostaglandin and that oxytocin is used in addition less often. However, misoprostol also increases hyperstimulation of the uterus. With smaller doses, the results are similar to other methods. The trials reviewed are too small to determine whether the risk of rupture of the uterus is increased. More research is needed into the safety and best dosages of misoprostol. Another Cochrane review has shown that the oral route of administration is preferable to the vaginal route.â€ (13)

Despite the effectiveness of Cytotec in labor induction, there is still debate on proper doses and if it is the proper choice, as opposed to other induction drugs.

Induction has long been questioned among VBAC (vaginal birth after cesarean) mothers. This is primarily because of the risk of uterine rupture being higher among VBAC mothers than those with an unscarred uterus, and due to the additionally increased risk of rupture when induction agents like Pitocin, Cytotec, or Cervadil are used. Combining a scarred uterus with a drug that stimulates the uterus is considered riskier.

“ACOG guidelines and other authors indicate that oxytocin use during VBAC is acceptable.” (11)

Sometimes, induction becomes necessary for VBAC mothers. When needed, it has been found that lower dosages of Pitocin is the best course of option and is preferable over Cytotec or Cervidil.

“While they [Cytotec and Cervidil] were initially considered safe for use during VBAC, current reports describe ruptures in approximately 2.5 percent of women after their use (one out of 40 cases).” (11)

Any uterine stimulant (Pitocin, Cytotec, Cervidil) can cause hyperstimulation and even rupture of the uterus. In the natural birth community, Cytotec is particularly controversial.  Known as a drug which has caused both damage and death in induction mishaps, many discourage its use.

Part of this stems from this statement by the FDA addressing induction and postpartum use of Cytotec:

“These [induction and postpartum hemorrhage prevention] uses are not approved by the FDA. No company has sent the FDA scientific proof that misoprostol is safe and effective for these uses.

There can be serious side effects, including a torn uterus (womb), when misoprostol is used for labor and delivery. A torn uterus may result in severe bleeding, having the uterus removed (hysterectomy), and death of the mother or baby. These side effects are more likely in women who have had previous uterine surgery, a previous Cesarean delivery (C-section), or several previous births.” (1)

Litigation regarding the drug has also been telling.  While Cytotec is cheap and easy to administer, it has also been the subject of the largest medical malpractice suit to date.  David Woodruff won a California family a 70 million dollar award against a hospital and HMO who administered the drug in an induction. (4) The induction ended with a baby badly brain damaged by the powerful contractions that resulted.  The money was sought, in part, to provide continued care for the child.

This video clip tells the story surrounding this landmark case.

Stories of babies and women damaged or killed by Cytotec misuse, lawsuits, and the FDA’s lack of endorsement contribute to an overall distrust of this medication especially among those seeking natural birth.

Despite the controversy surrounding Cytotec, the drug is useful in certain capacities relating to labor and birth, and is particularly helpful in stopping postpartum hemorrhage.

When used postpartum, Cytotec is often inserted rectally and can cause contractions of the uterus which can quickly staunch postpartum bleeding, thus preventing excessive blood loss and even death.

“A descriptive study showed that 1000 µg of rectally administered misoprostol, when given to patients who failed to respond to oxytocin and ergotamine, controlled postpartum hemorrhage within 3 minutes.” (8)

Some research has also found oral administration to be effective.  However, it is generally recommended that better studied oxytonics, such as Pitocin, be used; although, Cytotec is thought to be a good option in third world countries.

Cytotec has the capacity to save lives, when used appropriately. As with all other drugs and interventions, overuse, unnecessary administration, and excessive doses can do harm.

Be sure to speak to your care provider and find out how they will employ this powerful medication in relation to your birth.

Cochrane Review of Misoprostol use and safety: