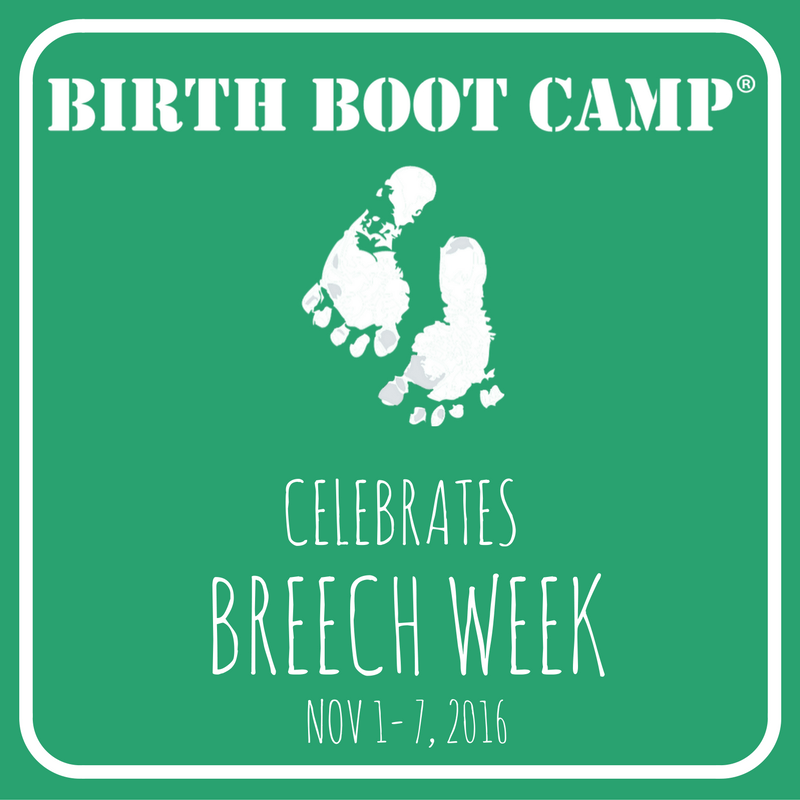 By BirthbootcampNovember 2, 2016February 6th, 2017No Comments

Our instructors and doulas are a group of talented women. Today we share information from one of them who has passion for helping bring awareness about breech babies. All too often the announcement, “Your baby is breech,” comes late in the pregnancy and totally blindsides the birthing woman. Lauren McClain, a Birth Boot Camp instructor in Bowie, MD and founder of Better Birth is seeking to change that.

Here is what she has to say as she brings awareness through Breech Week!

I’d like to make a brief public service announcement in honor of breech babies and their parents everywhere. If you know all about breech and just want the tip, skip to the end

A breech baby is one who is presenting butt or feet first instead of the usual and more ideal head-first. Having a breech baby means that if your baby were born now, its butt or feet would come out first.

Breech babies can be born safely-

Breech babies can be born safely at home and in hospitals, through vaginas, every day. Most providers are hesitant or completely against attending vaginal breech birth because of the increased risks (physical, professional, legal) associated with an after-coming head.

Because of this, every person should have as much time as possible to prepare for and understand the choices surrounding a breech baby. This means knowing as soon as possible that a baby may not turn head-down.

Living in the United States (and many other places) means that if your baby is breech at term, your chances of finding someone to attend the vaginal birth of your baby come down to geographic lottery. You’re in luck if you happen to live near one of the handful of fabulous OBs who are doing late-transfer vaginal breech births, or are open to having a home birth with a vaginal breech-birth experienced midwife. If not, your choices will come down to the following:

Not great options. But options! If you don’t know your baby is butt-down until 38 weeks, your options are more limited. All of the ways we help babies take a better position in utero work better when employed earlier. Best results are seen around 34-36 weeks.

If, at this point they declare that the baby is breech and if it doesn’t move, a cesarean birth will be scheduled at 39 weeks (or whatever week they are comfortable with). Sometimes, the option of an ECV is given.

Cesarean surgeries are considerably safer than they used to be, and doctors almost universally prefer them. If you end up with one, it’s really no skin off their noses. It is, however, quite literally your skin, and you probably care. Learn about all the options for a breech baby.

Since few people have the option of hiring a breech-confident caregiver late in pregnancy, and unassisted breech homebirth is far from ideal, the vast majority of us are left with two choices: schedule a caesarean or find a way to turn the baby.

You can’t turn the baby if you don’t know it needs turning, and the earlier you are in pregnancy, the more likely the turning methods will work.

What can you do?

Ask your provider around 32 weeks if your baby is head down.

Birth professionals: Tell every pregnant person you work with to look into baby’s position around 32 weeks.

At 32 weeks there is still a 57% chance a baby will go head-down without us doing anything at all. At 36 weeks, it’s more like 45%. By 37 weeks, it’s just 12%. There is always a chance the baby will turn. Babies even turn in labor. But knowing earlier gives you more time, more options, more chances, less stress.

Find out early. Ask about baby’s position between 32-34 weeks.

Learn more about breech now! Get a free pdf Guide to Breech (and other awesome birth printables!) from Lauren at Better Birth Graphics.