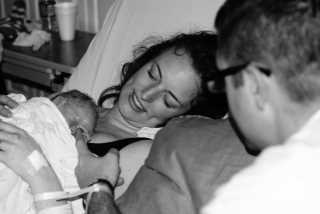 One of our goals at Birth Boot Camp is to train couples in natural birth.   This tender birth story from one of our former students exemplifies everything we hope for our couples.   You will see a father go from scoffing the idea of natural birth and frightened of birth videos to being an amazing and integral part of a family birth experience.

This is truly what we seek to do as a company- improve the birth experience for the mother, her partner, and their baby.

It was just about a year ago when we found out that we were pregnant.   I’d been a little too anxious with the first pregnancy test and despite assuring results up to 5 days sooner; the test still came back negative. A week later when Mother Nature still had not run her course, I tried again.   POSITIVE!

For reasons I don’t even completely know, I’ve always desired to have an un-medicated childbirth.   Granted, that wasn’t a conversation that really came up in our dating days, so when I told my husband this after we received the pregnancy news, he was a little unsupportive.   Okay, he might have even scoffed and said, â€˜yeah, we’ll see how you feel when the time comes.’   Thankfully, I was with my mother-in-law at the time and she does a wonderful job trying to help me understand my husband.   She explained that his only up-front experience with childbirth had not been a very positive experience.   My husband has an adorable 6 year-old son (whom I love with my whole heart) from a previous relationship.   They were young and unprepared.   The mom is tiny and my (step) son’s head is rather large.   All of that resulted in a lot of pain and eventually a C-section.   This is what my husband had in his mind.

After explaining my desires a little bit more and reading a book that got us both on the same page, my husband jumped on the un-medicated band wagon with me!   We enrolled in a local Birth Boot Camp (instructed by none other than Donna herself!) so that we could both be educated.   Friday evenings were one of our favorite times.   It was great having time to be so intentional about understanding the birthing process.   What we both found most useful was the emphasis on the husband’s active role throughout the pregnancy, labor, delivery, and beyond.

What my husband found most uncomfortable was the birthing videos.   Seriously, he’d turn away, cover his face, catch glimpses of the video and be totally disgusted.   Uhâ€¦.he was supposed to be my #1 support during the delivery; how were we going to make sure this happened?!   As classes went on, the whole birthing process became a little lessâ€¦disgustingâ€¦to him.   However, to this day, he still will say he found the videos revolting.   Bless his heart.   However, having been exposed to un-medicated births via those videos let him know a little bit more about what to expect on D-Day (Delivery day).

When the day arrived (I would say finally but she came a few days early despite me being convinced she would come late : so perhaps unexpectedly arrived would be more accurate), we were as ready as we were going to be.   My husband had his affirmations written down for me, lots of lyrics and scripture saved, and an entire playlist put together for during labor.   I think we got through a few songs before she came much quicker than anticipated!   My husband was my #1 support that day as I had hoped he would be.   He was calm, encouraging, supportive and calm.   Did I mention calm?   When meeting my husband, calm probably wouldn’t be one of the words used to describe him.   Yet, thanks to a lot of prayer, the classes and conversation (and, yes, even the videos), he knew what I needed that day to have a positive birthing experience.   It was an incredible day all together.

I had a friend there with us taking pictures of the whole experience.   When talking to her a few days later, she told me the first thing she told her husband after watching our daughter’s birth was that she was super impressed (and even a little shocked) with how well my husband responded throughout the process.   Even my midwife commended him for his support.   While he might not have been the one to catch our daughter, he did manage to peak and even caught a glimpse of Kadence coming into the world : with her arm raised high by her head.   Really, Kadence?!   But to think he might have missed that if not for everything we had learned ahead of time.   I’m so incredibly thankful for our experience and how prepared we felt going into all of it.   My husband was so enthralled with how alert our daughter was immediately upon entering the world.   Really, he’s just enthralled with her in general.   I’m so thankful for Donna, Birth Boot Camp, our fellow Birth Boot Campers and the healthy arrival of our tiny newest addition.   We couldn’t have asked for anything more; we are incredibly blessed.